Dr. Pim Albers is a seasoned global and internationally recognized specialist in the field of justice sector reforms and the rule of law. After his graduation in public administration at the Erasmus University Rotterdam/Leiden University in 1992, he obtained his doctorate degree for his thesis about the reform of the judiciary in the Netherlands in 1996.

He started his career as a (senior) academic researcher in policy research at a research institute of Tilburg University, followed by several positions at the Netherlands Ministry of Justice and Security. During his work at the Ministry he became specialized in international justice related topics. For several years he was member of the board of the European Commission for the Efficiency of Justice (CEPEJ) Council of Europe, contact point for the European Judicial Network in Civil and Commercial matters and member of the European e-justice working party responsible for the creation of the European e-justice portal. 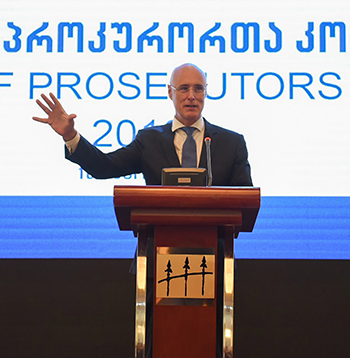 In his period in France he worked as a special advisor for the CEPEJ, responsible for the development of the methodology and drafing of the biannual reports European Judicial systems. These reports can be seen as landmark products and are used by numerious countries to initiate justice sector reforms based on comparative information of the 47 member states of the Council of Europe. Furthermore, he was one of the key developers and authors of the International Framework of Court Excellence, a global instrument that courts can use to improve their performance and quality of service delivery.

Dr. Pim Albers is the author of several articles, reports and books related to the justice sector and the judiciary. Moreover, he is a speaker, trainer and panellist for international conferences, workshops and expert meetings. He is (from 2018) vice-president of the regional board Europe of the International Association for Court Administration (IACA).

After retiring from the Netherlands Ministry of Justice and Security he established the successful consultancy company Albers International Consulting. This company supported several justice sector reform projects financed by international and European organizations and (co-)implemented by international businesses active in the development sector. The main regions of the company are Europe, (Central) Asia, the Middle East - North Africa (MENA).

In 2019 a new initiative started with the establishment of Iustus Consulting Services. Iustus must be seen as a rebranding of Albers International Consulting. Iustus will continue to deliver high quality consulting services and technical assistance to clients around the globe.